In sizes from DN 50 to DN 300, we carry out pipe freezing (pipe freezing) under pressure.

For freezing, pipe fittings are installed around the pipe to be frozen. The fitting required to freeze pipes (or freeze, freeze) is connected to a nitrogen tank with hoses and filled.

The liquid, deeply cold nitrogen inside the fitting causes the medium in the pipe to freeze through evaporation and the formation of an ice plug in the pipeline.

Once the ice plug has formed sufficiently, it closes the inside of the pipeline. The pipe is iced up (frozen) and your installation work can begin.

The pipe icing can be maintained for as long as you like, so that even long assembly times do not pose a problem.

Prerequisite for pipe frosting on pipelines

By reducing the temperature evenly on carbon steel pipes, there is no structural change. The tensions on the pipe surface are insignificant.

Preparations for freezing a pipeline 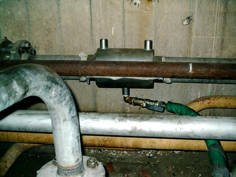 The sleeve required for freezing is mounted around the pipeline to be frozen. Depending on the size, one or two nitrogen hoses are connected to the sleeve and connected to the nitrogen container. During the freezing work, measuring devices that check the oxygen content of the air are set up in the working area. The temperature of the pipeline is controlled and continuously monitored during the entire freezing process.

Cooling down the pipeline 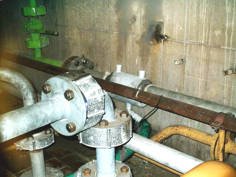 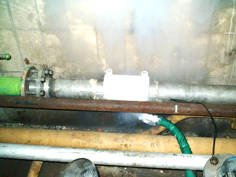 In the meantime, the temperature has been lowered by the evaporating nitrogen to such an extent that ice forms on the freezing collar. The medium (e.g. water) in the pipe starts to freeze from the outside in. Most of the nitrogen is still evaporating.

Freezing of the pipeline 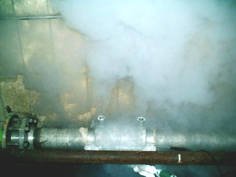 The pipeline is cooled down to such an extent that the nitrogen can remain in liquid form in the freezing sleeve. Liquid oxygen (-183 °C) from the ambient air condenses on the outside of the sleeve. The ice plug in the pipe forms steadily and grows from the outside inwards in the area of the freezing collar. 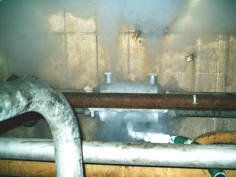 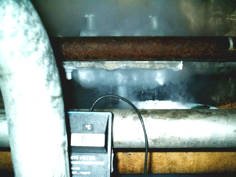 The freezing of the pipe is complete. A plug of ice has formed in the pipeline and sealed the pipe. Installation work can now be carried out (e.g. binding of system parts, gate valves or valves; replacement of fittings or flanges; replacement of defective seals, etc.). The freezing can be maintained for any length of time by means of a constant inflow of liquid nitrogen. After completion of the work, the nitrogen supply is stopped and the ice plug thaws again.

Production or work in the plant could continue and did not have to be interrupted or reduced as long as it was not dependent on the frozen pipeline. Draining of the pipeline was avoided. Unnecessary costs were not incurred.

We would be happy to provide you with information about the extensive possibilities of pipe freezing in a personal conversation. We look forward to your inquiry...

To the Inquiry Form